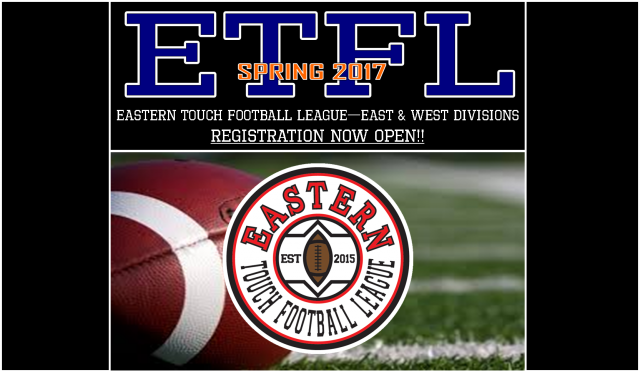 Happy 2017!  The future is bright in the Eastern Touch Football League as we venture into the Western part of Durham to begin the ETFL West Division!  Registration has officially opened for players to participate in their choice of either East or West divisions.

What is the difference?

The East Division began as, and will remain, a highly competitive division with the fast paced 3 'steam-boat' rush, 3-for-20 style of play.  We will continue to operate the East Division as it has in the Oshawa/Courtice region.

The West Division will offer a more accessible location for our westerly ballers by operating out of the Whitby/Ajax area.  By popular demand, the ETFL is broadening it's horizons by extending to the western durham area and allow for more players to be able to take part in the league.  The West Division will embody the same rules, spirit and atmosphere of the East Division which most of us have already come to know and love, only less of a drive for players coming from the East Toronto/West End region.  The ETFL endeavors to one day expand the game of touch football throughout the GTA.

Answers to all the questions, and more details about the Spring 2017 Campaign in the ETFL will be provided in the coming weeks.  We hope you are all excited and help to spead the word about the League Expansion.  It's going to be another great year in the ETFL for it's players and members, so join now and become part of our Football Family!